Outdoor marketing offers much, much more than that.

You probably know something about targeting online, and all the data available to you on the various online platforms. Some of that intrusive data is irking a growing number of consumers in their privacy bones. But from a marketing standpoint, even with what online media platforms can deliver in targeting, they often lose in chaos, distraction, and noise. It’s hard to break through.

So if you’re looking for a way to directly engage with more of your target audience through channels other than the digital ones, you’re about to learn the secrets to audience targeting in outdoor marketing.

Basic Targeting Methodology – What Everyone Knows

You know the basics of audience targeting — you want to find your potential customers based on age, income levels, location, gender — those sorts of broad categories.

And that’s where most marketing campaigns should begin. But it’s not enough. If you’re selling home improvement materials, you don’t want to waste your marketing on people living in apartments – even if they’re in your ideal demographics for all those broad categories. 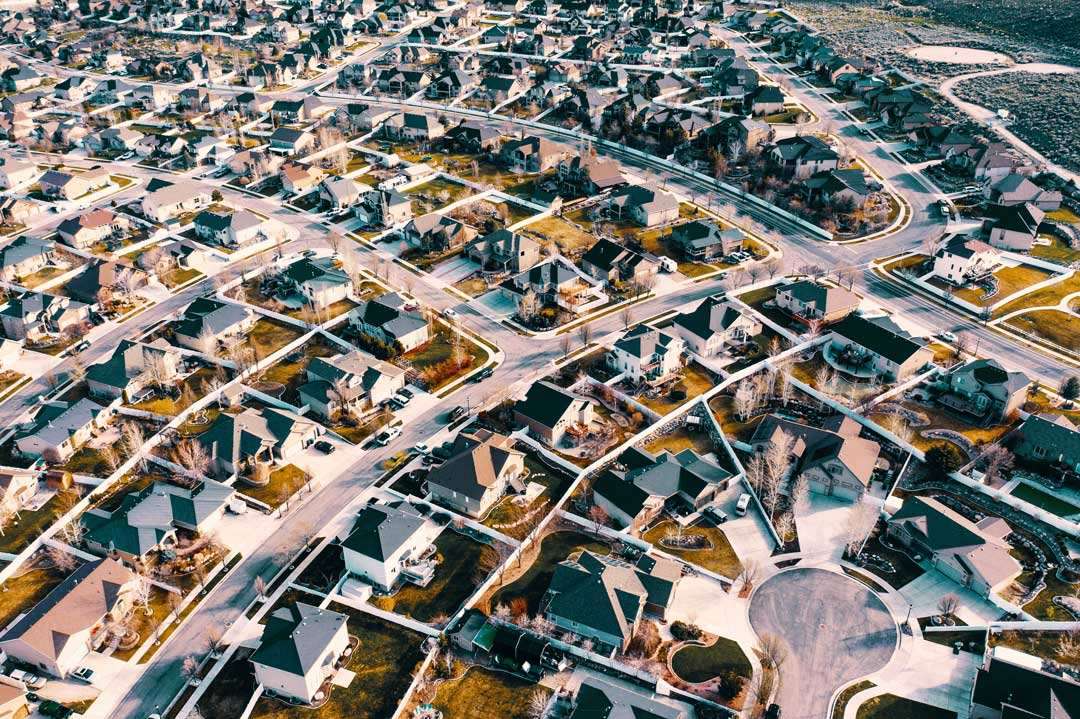 That means, how you define terms like ‘location’ matters — a lot. ZIP codes aren’t good enough. And neither is drawing a radius around your store locations.

You can also do basic targeting using media platforms like TV and newspapers. These reach a wide audience that can be somewhat narrowed by certain preferences. But it’s hard to get very specific and know who is actually seeing your ads.

Using the mail, you can use EDDM (every door direct mail), which targets postal routes, which are much smaller than ZIP codes. That’s a less costly method for targeting through direct mail than the usual methods, but you’re limited in what you can do in other ways.

For outdoor marketing, basic targeting usually means finding a billboard or other signage on a street you think your ideal customers are more likely to travel on and hoping for the best.

None of these methods offer the hyper-efficiency of advanced outdoor targeting methods.

No form of advertising gets higher impressions than front door marketing. It bypasses all the gatekeepers, distractions, and weak targeting inherent to other forms of media.

But only if you do it right. Plastering neighborhoods with flimsy fliers is so 20th century.

ZIP codes and drawing a radius around your store doesn’t work as well because you’re still including too many people who have little to no chance of buying your products.

Again, consider the home improvement products store. A radius or a ZIP code is bound to include apartments and condos which spend much less on your products. If you remove those and focus on homeowners, you’re still not being specific enough, because what about home renters? What about retired people or on-the-go professionals who hire contractors to do their home improvement work for them?

In this example, you might focus on married homeowners over age 30 living in homes five years or older who make at least $50,000 per year, and who have spent money on remodeling projects within the past two years.

That’s just one option. You could also look at homeowners who own a pickup truck, because truck owners tend to be people who like to do things themselves.

Most importantly, you would not rely on ZIP codes, store radius, or even postal routes. You would use what we call block groups. About 95% of products marketed through Power Direct are delivered at the block group level.

For comparison, a block group tends to be about one thirtieth the size of a ZIP code. It’s a neighborhood level, street by street approach to targeting. And we have data on about 600 different demographics at the block group level, some of them extremely specific like in the example just given. 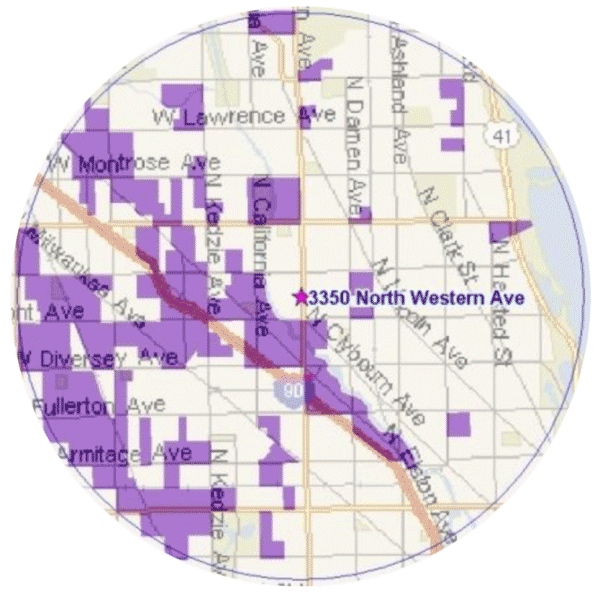 We can create a data set of customers for you that is far more exact than anything you’ve imagined for outdoor marketing or front door advertising.

In fact, you can get a sample set of data for yourself for free, right now.

Click here to get real customized data about where your best customers are located. It’s free, you get to keep it, there’s no obligation to buy, and you don’t even need to provide a bunch of personal information.

Let’s look at a couple real examples to see how this form of advanced targeting for front door marketing has worked for some of Power Direct’s customers.

A competitor was going to open a new store within proximity of one of our client’s stores. Rather than just send out a targeted front door advertisement to every home within a certain radius of the store, here’s what we did in response:

We drew a radius around both stores, and looked at the area where they overlapped. Why? Because for grocery stores, most people shop based on proximity first, and other factors second. So we’re probably going to lose a lot of people who live right next to the competitor’s new store. It’s not worth the budget to go after the handful who might still come to our store.

But where the radiuses overlap – this is where the competition will play out.

Within that overlapping zone, we looked at which neighborhoods spent the most money at wholesale stores – a very particular subset of grocery shoppers. Within that we found about 100,000 households.

That’s still a lot of mailings. So, we moved to phase 2.

Narrow it down with advanced targeting

Which demographics reveal our most likely customers in this scenario? We cut the 100,000 households in half, selecting the 50% who spend the most money at wholesale type stores. This makes financial sense from an ROI perspective. Go after the big fish.

Then, we narrowed that down even more by selecting households with families. Why? Because among the big spenders, they will spend even more simply because there are more people in the house.

So now, we have a hyper-specific audience target to create a front door marketing campaign that is highly likely to generate strong and long-term return on investment:

We could even narrow it down to families with two or more kids, pets, multi-generational, etc. Much of this depends on the budget you want to spend and how aggressive you want to be.

And even that approach depends on the neighborhood targeting method – using blocks, not ZIP codes.

In this example, it was a QSR chain that was having trouble reaching customers using Valpak. They wanted to achieve better targeting that focused on certain types of households who were within a certain distance of their various franchise locations. Here’s what we did:

Hopefully you’re catching on already. We don’t just use ZIP codes. This client originally wanted to focus on ZIP codes, which for one location meant 15,000 households. That was too big for their budget.

So, we broke down that ZIP code into neighborhoods within a certain distance to their store. Why? Because another reason ZIP codes don’t work is that franchise locations are not all located in the exact center of a ZIP code. So you might mail to a household in a particular ZIP code, advertising for a particular store location, when there is actually another franchise located closer, though in a different ZIP.

That’s a huge targeting failure, because it means a customer will show up to the wrong location and not get the deal they were expecting.

Narrow it down with advanced targeting

Who really likes to eat the food served by this particular QSR? They decided they wanted to focus on 18-24 year old men who like hot dogs and sausages. They chose this age group because if they can excite them about their menu at young ages, they’ll be more likely to become lifelong customers. They didn’t want to send front door marketing to retirement communities. 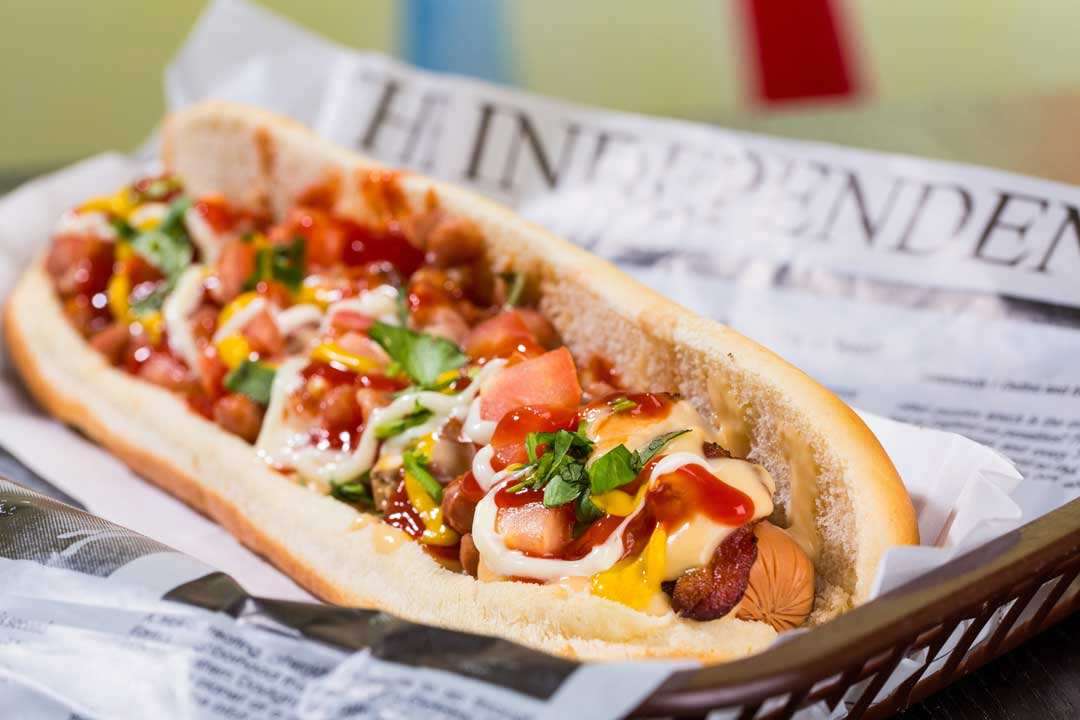 We have data showing average dollars spent on beer, hamburgers, and hot dogs — the relevant demographic for this customer — across each neighborhood. Again, we have data on over 600 very specific demographic categories.

So, we were able to narrow it down to specific households within the neighborhoods closest to the location, and then send out the front door advertising.

We can create a data set for you just like in these examples – for free!

We’ll map out the targeting after you answer a couple questions. Then, you get a set of customized data, which you can use to impress your boss and then use it however you want. It’s yours to keep!

Get Free Data on Your Customers Today